From Tanks to Trains, to the BruinBus: One Veteran’s Journey to UCLA 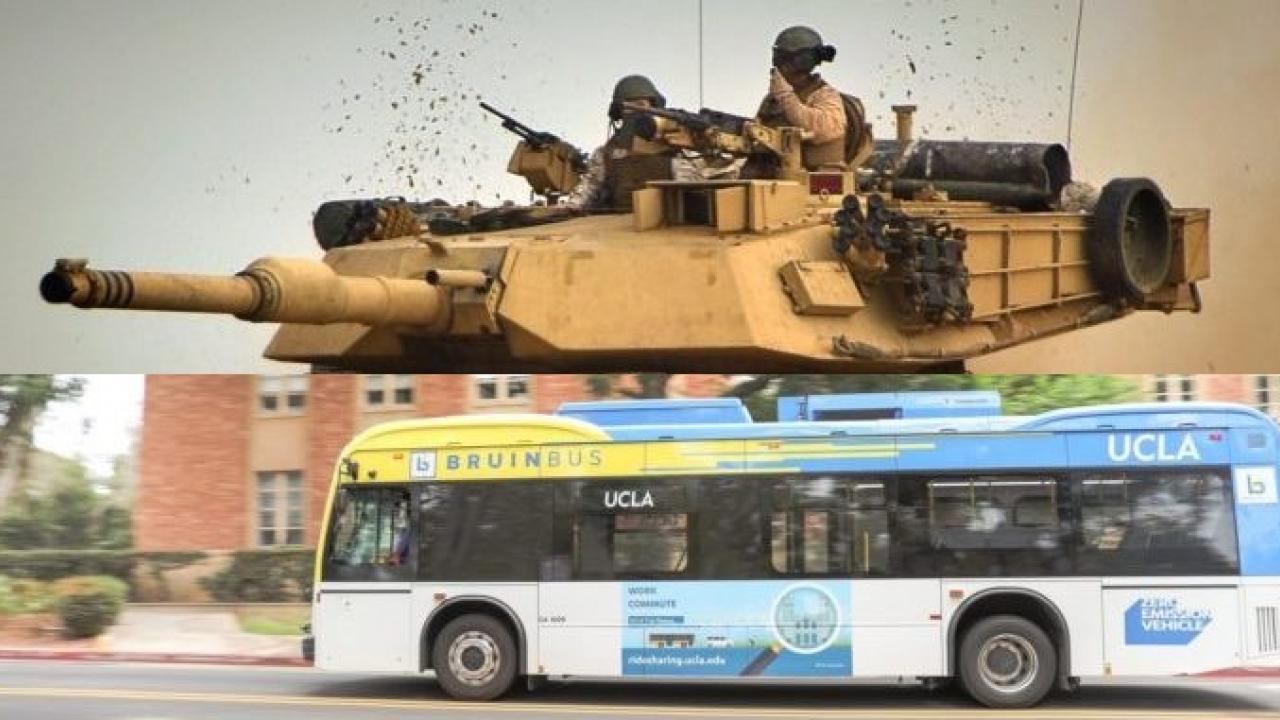 He served his country in the U.S. Marine Corps, and now Matt Corbin from UCLA Transportation serves the Bruin community, keeping the campus moving and helping the environment along the way. From Semper fi to sustainability, Matt leads efforts to expand the use of eco-friendly vehicles on campus. And he's been honored for this service — in September, UCLA Transportation earned a 2020 Green Fleet Award.

Before he started down the road of managing fleet services and transit operations at the University, Matt followed in the footsteps of family members before him, enlisting. First stationed at Camp Pendleton San Diego, then Fort Knox in Kentucky, and finally the Marine Corps Air Ground Combat Center in Twentynine Palms, California, before deploying overseas to the Persian Gulf. The next four years were an eye-opening experience.

“While on deployment, you figure out exactly who you are as a human being and what defines you, while processing so many different things all coming at you from multiple sources, and all at the same time. I suppose you could say that your adrenaline takes over, racing through your body, and elevating your level of awareness,” Matt said.

“I learned so much about myself, having a natural ability to stay calm and extremely focused among an environment of controlled chaos."

That chaos included two close calls. An injury to the eyes left Matt unable to see with a burning feeling on his face. He was carried off by a team member who assured him, “not to worry, I got you." Matt recovered after a couple of days and was back in action.

The second time was more serious, with Matt on the receiving end of a grenade, taking shrapnel to the body. After surgery to remove the fragments, which he kept as a souvenir, he was classified as disabled, signaling the end of action. Matt returned to Twentynine Palms to finish his tour of duty and be honorably discharged.

He went on to college, studying computer science, software engineering, and instructional technology. When the dot-com bubble burst crashed his plans to work in tech, he found a different path, along the railroad.

As a company officer with the Union Pacific Railroad Matt managed several different operations. “I was afforded a number of opportunities, to live in a number of different parts of the country, and meet and work with an extremely diverse group of people.”

Now Matt is on board at UCLA Transportation, where he's been for just over a year. Matt provides direction to improve BruinBus service, introduce more electric vehicles into the fleet, enhance services like the UCLA SafeRide evening van, and most recently implement COVID safety measures.

When the pandemic hit, Matt remained on-site, ensuring vehicle operations for essential functions continued uninterrupted. His team keeps University vehicles in top working order, including those for the hospital and other vital services, as well as the BruinBus, which transports over one million passengers every year.

Thankfully, being a Marine prepared him for dealing with bumps in the road.

"My military experience has shaped my life in countless ways: from a basic fundamental understanding of how you view the world to how you deal with obstacles. It taught me leadership, teamwork, discipline, pride, tolerance, compassion, survival, and gratitude."

Matt feels blessed and privileged for the opportunity to serve his country. What he learned from his time in Marines carried over to a commitment to supporting faculty, staff, and students navigating the campus and dedication to growing a sustainable fleet.